Skip to primary content
Dear Friends of 4 Paws 1 Heart, Please don’t forget that we continue to need your help so that we can help the abandoned and abused who either are brought into the emergency hospital or rescued by our rescue friends. We rely totally on individual donations and fundraisers. Today I wrote the check to honor a commitment that kicked off a major effort to save this suspected bait dog who was rescued by an individual. And, I’m proud to say that with the help of Dr. Dawn, the tenacity of the rescuer, Leah W., and another organization, Tail Waggers, who put out a call for monetary help, we were able to save this dog who will now have a second chance to be loved. Here is the message that began the effort: 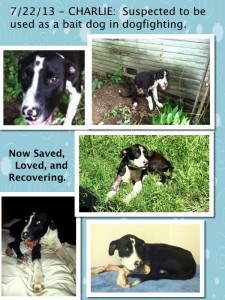 7/22/13 “Dear Diana and Gina, I’m writing to you because I’ve taken in a stray dog who is in need of urgent help. I found him in my northwest Detroit neighborhood hanging out by an abandoned school. He was whimpering and clearly in rough shape, with swollen front legs and part of his mouth hanging limp, so I brought him in to my vet. She speculated that he was likely a bait dog in a dog fighting ring. She also said that she believed that while his injuries were serious and would require surgery, he could be treated. Of course, given all he has been through, his psychological wounds would need a lot of attention as well. One of the vet techs told me about your organization, and I wanted to see if you would consider taking this very sweet boy on. I am currently keeping him in my back yard, feeding him and giving him the antibiotics and pain med prescribed by the vet.” ~ LeahI contacted Leah immediately and, although, we could not commit to paying the entire cost of what would be extensive surgery, we could at least get the ball rolling. Thankfully Dr. Dawn trusted that we would honor the dollar commitment and an appointment was made for the next day. There were two critical issues beyond having the money for the surgery and those were knowing Charlie’s mental state and what his quality of life would be after surgery. Dr. Dawn was going to include that in her assessment before performing surgery. Dr. Dawn and Gina spoke and later that day Dr. Dawn saw Charlie and felt strongly that he could be saved. Surgery was then performed based on our promise and Leah’s commitment to seek additional funds (which was successfully accomplished with the help of Tail Waggers who got Charlie’s story out which resulted in more donations for the surgery and after care). ~ diana